A disease of the skeletal system, osteoporosis — known also as "porous bone" — affects both men and women and all demographic groups. When bones lose mineral mass and density, they become more susceptible to fractures and breaks. Osteoporosis is called a silent disease since often it is not detected until a joint or vertebral fracture of some kind occurs.

Osteoporosis is a condition of very low bone density. Think of it as "thin bones". Osteoporosis affects 10 million people in the United States, mostly women. Another 34 million 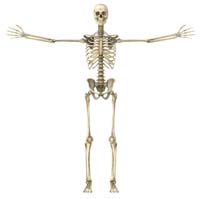 Americans have bone density that is lower than normal. Every year osteoporosis is associated with 2 million broken bones in the US. It is estimated that one in three women over the age of 50 will experience a bone fracture due to low bone density.

Bones are living tissue that have an outer layer of cortical or dense bone, that wraps itself around trabecular or spongy bone. The spongy, healthy internal part of bone resembles the image of a porous sponge, and with osteoporosis, effectively the holes in the sponge increase and become more numerous, thereby contributing to an overall weakening of the internal structure and not providing the exterior with the support it needs.

How can I tell if I have osteoporosis?

How is osteoporosis treated?

What groups are most at risk for osteoporosis?

How bad are broken bones from osteoporosis? These breaks can be very painful and unlike the types of breaks that young people get. They are not clean breaks so much as fragmentations. They often strike the spine or hip area and can be debilitating and lead to the patient entering a nursing home. Indeed, surveys of women past age 75 find most prefer death to a bad hip fracture.

Note that not all bone breaks and fractures in older people are due to osteoporosis, so the formal definition of the disease includes low bone density as determined by diagnostic techniques.

The pathogenesis of osteoporosis can be attributed to three sources:

The folk understanding of the body's bones as simply an internal structural scaffolding with no other function is mistaken. Bone is living tissue, constantly being remodeled.

Advanced cases of osteoporosis can disable a person and severely limit mobility. A main cause of nursing home admittance is people not being able to walk independently after a bone fracture.

Do I have to take Fosamex or Boniva or Reclast for the rest of my life?

Etymology of the Term

The word osteoporosis arose in the nineteenth century in France. It entered English language medical books in the early 20th Century. The definition of osteoporosis has evolved with medical knowledge. The current 1990 Consensus Conference definition focuses on physiological deterioration of the bone as indicated by bone density measurement.

Osteoclasts are bone cells that remove the bony tissue (mineralized parts of the bone). They are active mostly on the surface of cancellous bone (aka spongy tissue) and in cortical bone. Osteoblasts are the cells that create the bony tissue (lay down the minerals). The resorption/removal process is faster than the laying down of new bone by osteoblasts, so an increase in bone formation and remodeling overall results in a loss of bone mass, when it occurs in adults. Glucocorticoid drug use and physiological conditions such as chronic inflammatory disorders and thyroid hormone problems can contribute to the risk of bone fracture.

In the past, people thought a shortage of estrogen caused osteoporosis. The source for this idea was the observation that most patients were women who came down with osteoporosis after menopause, and because estrogen does influence the bone-forming activity of osteoblasts. However, research has found that decline in estrogen levels is not a major cause of osteoporosis.

A couple decades ago, estrogen supplements were given to post-menopausal women to reduce the risk of osteoporosis and for other reasons. This practice is employed much less frequently now because the benefits of estrogen do not seem to outweigh the risks.

Another old theory was that calcium deficiency caused osteoporosis. Older people consume less calcium and Vitamin D than younger people, and the aged digestive system doesn’t absorb those nutrients as well. And the cumulative effect of not enough calcium and vitamin D over the years leads to osteoporosis.

The body produces parathyroid hormone (PTH) which regulates serum calcium and phosphate levels. Hyperparathyroidism happens in many older people and epidemiological studies have correlated this condition with osteoporosis incidence.

Tests with giving people supplements of calcium and Vitamin D has resulted in increases in serum levels of both, and even increase bone mass, but it is not clear whether these supplements decreased the rate of bone fractures. Synthetic parathyroid hormone is used as an osteoporosis treatment.

When scientists discovered the natural hormone calcitonin inhibited the action of osteoclasts (around 1970), people thought natural calcitonin deficiency in the body might be the cause of osteoporosis and that calcitonin supplements might cure osteoporosis. Further investigation found that there is no deficiency of calcitonin in osteoporosis patients, and although supplementation found some use as a therapy, it was never as effective on a large scale as bisphosphonate drugs.

In the old days, before the BMD test,, doctors only diagnosed osteoporosis following bone fractures (sometimes slight fractures seen only in an X-ray.) While the disease was often strongly suspected in women who lost height, only fractures could give a definitive diagnosis. The BMD allows doctors to find and treat osteoporosis and osteopenia before fractures occur. Indeed, the medical profession’s definition of osteoporosis is now based on bone density, not fractures. (There is dispute about whether this is the way it should be.)

The main risk factors are age (past 50) and being female. People with a small body frame tend to get osteoporosis at a higher rate. Atrophy, for instance when a person is immobilized due to a spinal cord injury or stroke, is associated with osteoporosis, Certain medications, including chemotherapy for cancer, increase the risk, and there have been cases of osteoporosis tied to celiac disease, when a patient does not absorb enough nutrients.

Bone fractures are more common in people with diabetes than those without diabetes, but this appears to be because osteoporosis and diabetes are co-morbid, rather than one causes the other, at least for Type II diabetes. Type I possibly contributes to the onset of osteoporosis, but the proof is not strong.

Lifestyle practices such as cigarette smoking, alcohol consumption, and lack of exercise can increase the risk of osteoporosis. Hormone abnormalities (include hyperthyroidism and low levels of sex hormones) can increase risk. A very rare hormone problem is hyperparathyroidism, where the parathyroid gland in the brain produces too much hormone.

Less common causes of osteoporosis include.hyperthyroidism (overactive thyroid), acromegaly (abnormal growth of the hands, feet, and face due to gland abnormalities), and pregnancy.

More on symptoms of osteoporosis