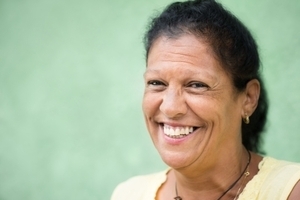 People with Parkinson's Disease have a higher risk of bone fracture for two main reasons: 1) they are old – and Parkinson's and osteoporosis tend to be a disease of the elderly, and 2) they are susceptible to falls, losing their balance, and unintended motions that can result in injuries. They also, it appears, are more likely to get osteoporosis. It was long thought Parkinson’s patients had osteoporosis in the same percentage as other people of the same age. But recent research shows Parkinson’s patients are at higher risk for the disease, and particularly for hip fractures.

Italian researchers report that osteoporosis or osteopenia strikes 91% of women and 61% of men with Parkinson’s.

People with neurological disorders often limit movement, which increases the risk for osteoporosis. Patients at stages III and IV on the Hoehn and Yahr scale are at more risk.

The reasons are not known. There does not appear to be any relationship between serum calcium levels and Parkinson’s, and such factors as Vitamin D and estrogen have no significant effect on Parkinson’s.

Doctors overseeing Parkinson’s patients order regular bone density scans to check for osteopenia and osteoporosis, especially if the patients are having trouble walking.

The Parkinson’s Disease Foundation recommends patients pay attention to their diets, and that includes getting calcium and Vitamin D in sufficient quantities.

There is some evidence that SERMs like raloxifene have some positive benefit on Parkinson's but it is too little to form a treatment plan from. Noticing that men get Parkinson’s more often than women, scientists have hypothesized that estrogen plays a neuroprotective role. A study found that Tamoxifen patients did indeed have slightly higher Parkinson’s rates, but the effect was not large.