Two important factors in determining how bad a burn is include how hot the skin gets and how long the burn lasts. The location is also important because skin varies in thickness, water and oil content, the amount of subcutaneous fat, and the number of blood vessels from one location in the body to another.

The seriousness of a burn injury depends on how deep the injury is and how much of the body has been burned. It is common for a person with a large burn injury to have burns of different depths. The deepest injury is usually at the center of a burned area. There are a number of tests used to determine the depth of a burn injury, but an experienced burn specialist’s examination continues to be the most reliable way of evaluating the depth of burns.

A potentially dangerous condition that some burn victims get into is damage to the pulmonary system so they can't breath. Inhalation injury is the most common cause of death in burn victims. Flash burns often harm the face but rarely involve the airway, unlike severe burns from prolonged heat exposure associated with smoke inhalation.

The depth of a burn injury is important

The skin has several layers (see diagram). The deeper the burn injury is, the greater the number of layers that are damaged. Sweat glands and the roots of hair follicles are in the deeper layers and will be destroyed with a deep burn. Deep injuries heal more slowly, are more difficult to treat, and are more likely to have complications than superficial injuries. 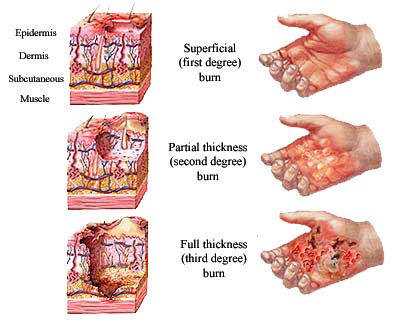 An injury that extends down to the third layer (the subcutaneous tissue, which includes fat) is called a full thickness injury (formerly called a third degree burn). Burns that damage muscles underneath the subcutaneous skin layer are described as full thickness burns with injury to the underlying muscle (sometimes formerly called fourth degree burns).

Superficial burns normally heal within 5 to 7 days. A common type of superficial burn is a sunburn. Because the top layer of skin (the epidermis) is thin (about the thickness of a piece of paper), it is easily replaced. Even when skin is not injured, the skin completely replaces the epidermis every 45 to 75 days. Healing from a superficial burn usually occurs without scarring, although there may be some permanent discoloration.

A full thickness burn destroys all three layers of skin, resulting in the loss of not only the skin but also the hair follicles, sweat glands, and the region where new skin cells are formed. For these reasons, full thickness burns require skin grafts.

Fourth degree burns extend through the skin into underlying tissues - ligaments and muscle - these are often life-threatening.

Although the treating physician usually makes a quick assessment of the burn degree on initial inspection, further analysis can cause a reassessment.

Estimating the size of a burn

Different systems have been developed to estimate the percentage of total skin (total body surface area (TBSA)) that has been burned. One of the older systems is known as the Rule of Nines, which is based on the rough approximation that each arm has 9% of the body’s total skin, the head 9%, each leg 18% (two 9’s), the front of the torso 18%, the back of the torso 18%, and the neck 1%.

When partial thickness or full thickness burns exceed thirty percent of an adult’s total body surface area, it is usually necessary to perform grafts in stages because the patient does not have enough healthy skin to graft the burned area in a single operation.

The etiology of burn injuries are different in different countries; people in less developed countries experience burns more often and about half of all burn injuries worldwide occur in Southeast Asia. Women are more apt to be burned in cooking accidents while men are more prone to industrial accidents.